I recently had the pleasure of attending my very first Comic Con (C2E2). I have a large inner nerd and I’m very proud of her. No, I didn’t do any cosplay this time around, I much prefer to be the silent watcher and observer.  It’s a symptom of my introverted personality and being a writer. As a writer, I like to watch the world and Comic Con was a perfect opportunity to observe.

I mean, who wouldn’t want to walk by a troop of Star Wars characters? 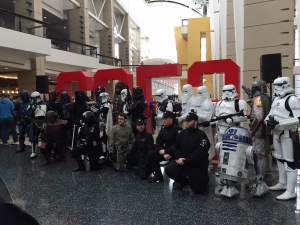 Besides the amazing costumes, fantastic artists, and geeky toy stores, Comic Con is filled with amazing panels. What I loved most about these panels, is the inspiration they provided.

This was the first panel I attended. It was NOT what I expected. First, I had never considered that video games needed writers… It’s just not something that crossed my mind. And to be honest, after the panel it’s not an area I want to break into, but the panel made some good points.

Okay, this was just fun. I love the TV show Agents of Shield and I’m looking forward to watching Agent Carter. The two main female actors from both TV shows hosted the panel. There’s nothing more inspiring than listening to two strong and successful women talk about their careers and give advice to other women. The key here: always kick ass. 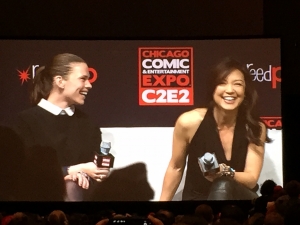 This was may favorite panel. A group of 5 fantasy novelists, including Patrick Rothfuss, talked about what it is like to write and publish fantasy. I’m a big fan of fantasy, of all types, and it was wonderful to hear from authors who have experienced success in the industry. The best advice:

I had a blast at Comic Con. I got to spend time with some close friends and I got the chance to dive into a brave new world that I’ve always wanted to experience. I’ll be back again one day, maybe at the San Diego Comic Con. Have you ever attended Comic Con? What was your experience?