The Dos and Don’ts of Theater Etiquette

The Dos and Don’ts of Theater Etiquette

A single moment. A breath of anticipation as you slide into your seat. You’re early, but missing curtain call wasn’t worth the risk. The minutes and seconds tick by with agonizing timidity. The seats fill up around you. The lights dim. And then, the curtain opens, and the smile that lights your face stays with you until the show ends. 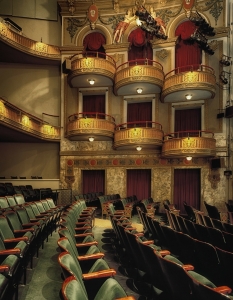 That is what it’s like to watch a Broadway production. Whether it’s your first show or your fiftieth, there’s nothing that can surpass live theater. As you watch, you’re constantly aware that hundreds of hours of work have gone into rehearsal and when the show starts, there are no do-overs. It’s a thrilling adventure that leaves you on the edge of your seat. Nothing can ruin the theater, except etiquette.

Theater etiquette, as vital as it is frustrating when it’s missing. Unlike a movie or TV show, there is no chance to watch the production again. Even if you can attend the same show again, it will be different. The players won’t be exactly the same, the intonation will be different, the audience will react uniquely. In theater, every show is one-of-a-kind and every attendee deserves the best experience.

Whether you’re a regular theater-goer or a first-timer, these Dos and Don’ts of theater etiquette will make sure that you and everyone around you has an exceptional experience.

Do Turn Off Your Cell Phone

Turn your cell phone off, means turn it off. If your phone rings in the audience, you could disrupt the cast and anger every theater attendee in the audience. Off also means that you can’t just turn your phone on silent. The theater is dark; when a phone screen lights up, it takes away from the magic. Off also means that you don’t text during the play. Whatever you have to say can wait until Intermission or until the show is over.

Each production is unique. Taking photos and videos is not allowed. First, the individuals around you will be distracted by your equipment. Second, an accidental or purposeful flash from your camera could surprise the cast and interrupt their flow. Third, you do not own rights to the show and so have no authority to post content online.

Do Eat Your Dinner Before the Show

Broadway shows are multi-hour experiences. They are also not movies. It is never appropriate to chew and crunch on popcorn, chips, and candy throughout the duration of the show. The show is live. Silence is not only for your neighbors, but for the performers. Respect that fact and eat only outside of the performance area.

Don’t Talk During the Show

Keeping quiet might seem basic, but it’s never appropriate to talk during the performance. Even if you think you’re only whispering to your friend, it’s a lot louder and more disruptive than you imagine. There is always time to talk after the show or during a break.

Do Prepare for Eventualities

If you’re sick, have your cough drops ready and pre-unwrapped before the show starts. There’s nothing worse than someone experiencing a coughing attack while trying to unwrap loud medicine at the same time. Have a bottle of water available in case something gets caught in your throat and keep tissue in case your nose is running. If you think something has a good chance of happening, plan and prepare.

Yes, you may know every lyric to every song, but that doesn’t mean you’re a performer. Leave the singing to those on the stage. The audience members who surround you did not pay to hear your voice, as lovely as it may be, they want to hear the professionals.

Do Respect Those Around You

Please try and remember that everyone in the theater is there for a magical experience and the theater is a small tightly packed environment. When you lean into your neighbor, sit on your feet to sit higher, hog the armrests, and kick the seat in front of you, it can drastically take away from the performance.

As you enjoy, ask yourself, “Would my actions annoy me if someone else was doing it?”